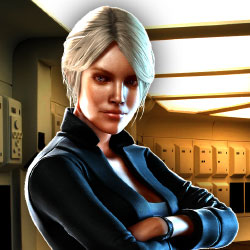 At the height of her military career, the young Imperial officer was personally chosen by Darth Vader to lead the Black Eight Squadron. Although she was initially honored to serve under Vader’s command, Eclipse was disturbed by the Sith Lord’s tactics which she considered excessively brutal.

Inspired by Galen Marek’s sacrifice, Juno Eclipse stayed with the newly formed Rebel Alliance. To ensure that Marek’s death would not be in vain, Eclipse dedicated her life to serving in the Alliance’s Rebel Fleet, becoming an officer in its ranks and retaining the rank of captain that she previously earned in the Imperial Navy.

The Empire wronged Juno by forcing her to kill the innocents, and she has sworn to exact revenge against them by joining the Rebel Alliance.
Juno fears Darth Vader!
No matter what life throws at your character, they always rise to the challenge. Your character is flexible and can handle nearly every situation, no matter how grim or strange the circumstances.
Your character shows little regard for how their actions may affect themself or others, due either to low selfesteem or lack of forethought. They are especially prone to dangerous or inconsiderate actions.