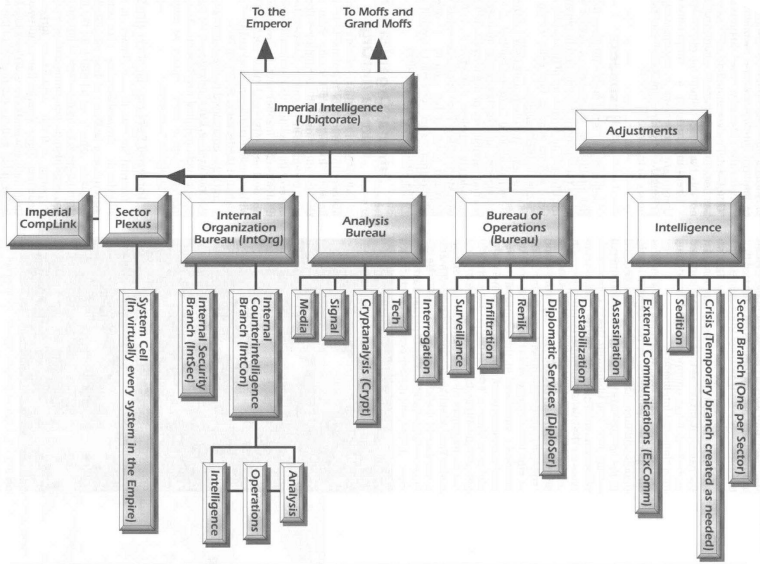 Adjustments is the most elite branch of Imperial Intelligence. It consists of agents who receive their orders directly and in person from the Ubiqtorate. No record of their orders is ever kept, and no mission files exist within Sector Plexus for these agents.

Whenever the Ubiqtorate feels a critical situation has slipped from the control of Imperial Intelligence, and that the situation is beyond the normal capabilities of the bureaus but not yet completely hopeless, Adjustments is called in to restore order. The Ubiqtorate briefs the Adjustment agent or team on the problem and what resources are available to solve it. Adjustments then solves the problem.

IntOrg is committed to the security of Imperial Intelligence, but rarely abuses its authority or conducts political witch-hunts. As a result, IntOrg enjoys a good reputation among the agents of other bureaus.

This bureau handles gargantuan amounts of data from tens of millions of sources. In addition to looking for enemy activity, it looks for patterns or trends in social data which might be useful to the agents over in Intelligence. Analysis also handles, examines and copies useful technologies, even developing a few of their own.

Of all the bureaus in Imperial Intelligence, this is the one which is called the “Bureau”; no one in Imperial Intelligence for more than a few days would call it anything else. The Bureau handles the covert operations which are beyond the scope or require greater resources than those of the average system cell. The Bureau may send in a team of specialists to a sector, in effect creating an at-large system cell, or they may send a few agents to augment an existing system cell for a single mission.

When Analysis finishes sorting, cleaning, decoding, or otherwise manipulating the data sent to them, they pass it on to Intelligence. Intelligence has culled experts from all over the Empire. They have recruited military experts, cultural experts, experts in politics, economics, science and technology, experts in almost every possible field of endeavor, intelligence has plucked experts from universities, corporations, planetary governments, artistic movements, religious movements, the media, the underworld — they have pulled in experts from nearly every conceivable place or organization, including some turncoats from the Rebellion.

Intelligence combines the vast knowledge of its agents with the most sophisticated computer models in the galaxy to predict trends or future actions of the enemies of the New Order. These predictions are refined into reports transmitted to the Ubiqtorate. From these reports, the Ubiqtorate establishes priorities and sets strategies for the whole of Imperial Intelligence.

Sector Plexus is the heart of the information system for Imperial Intelligence. While none of the bureaus are completely centralized, Sector Plexus is the most dispersed. Equipped with the most advanced communication computers and equipment in the galaxy, Sector Plexus conduits handle better than 99.95 percent of all Imperial Intelligence communications. The Plexus encodes, categorizes, transmits, stores, receives and decodes more messages in a single standard day than most planetary communications nets will transmit in over 800 standard years.

When the New Order was declared, there arose an ambitious group of scientists eager to free research from the parochial power struggles which typified the latter days of the Old Republic. They proposed a vast computer network connected to the HoloNets, giving scientists on any of millions of worlds instant access to information vital to their research. These scientists designed and wrote much of the software necessary to support such a system, presenting the entire package to Palpatine and his advisors.

The idea was rejected, ostensibly for the tremendous additional funds needed to upgrade the HoloNet to handle the increased flow of information. The costs were real, and Palpatine needed the tens of trillions of credits elsewhere, but he also feared a system which would allow such an instantaneous and complete exchange of information between citizens of the New Order.

Imperial Intelligence managed to retrieve almost all of the documentation and software, and recruited a number of the scientists who proposed the Imperial CompLink. Using the PDVs and Plexus conduits to link the computers, rather than HoloNet technology, reduced the costs more than ten thousandfold. The prospect of having access to every computer bank in the galaxy, with the nearly inconceivable wealth of information such a system would provide, was too tempting to ignore.