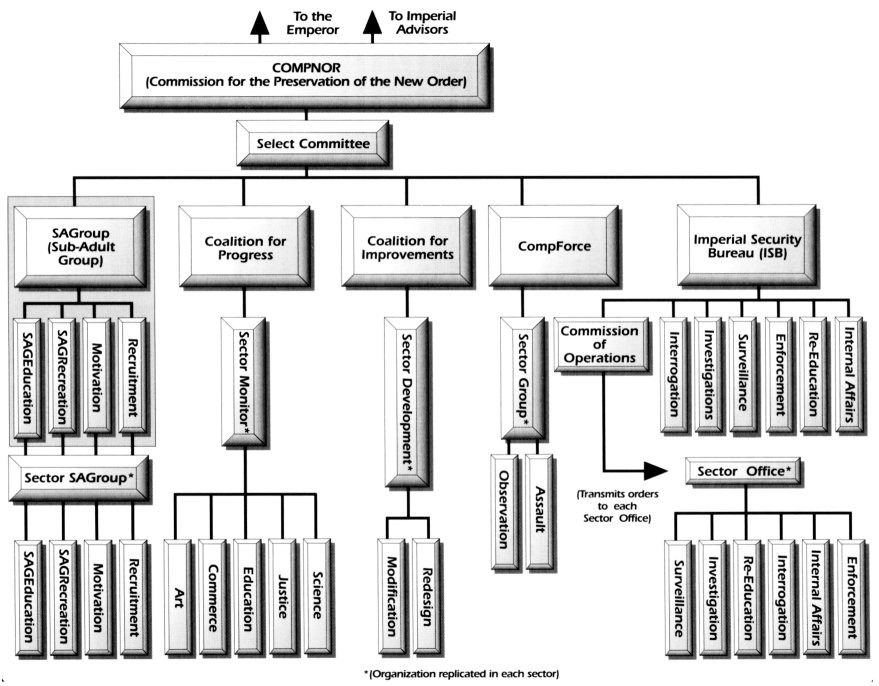 COMPNOR, the Commission for the Preservation of the New Order, was formed in Imperial City months after Palpatine assumed power. Initially COMPNOR was little more than a social gathering for idealistic young beings who saw in the New Order a deliverance from the chaos of the dying days of the Old Republic.

One of the Emperor’s advisors, one Crueya Vandron, saw the potential worth of a populist movement which could be molded into a useful political tool. Overt encouragement and discrete funding were provided, giving COMPNOR the appearance of a spontaneous organization enjoying phenomenal growth.

Crueya Vandron gave COMPNOR the resources to grow, but the Emperor took a hand in the shaping of the organization. His methods were patient, defeating his opponents within COMPNOR not through violence or threats, but with a hidden, gentle, consistent pressure which wore the opposition down. Those who opposed the change in COMPNOR never even knew the Emperor had done anything to instigate the changes. Most could not even explain how the nature of their organization differed from what they had envisioned.

Key members of the group were approved for the Select Committee, that part of COMPNOR that would oversee the rest of the organization, with implicit approval of the Emperor. Then the changes became more sweeping. The Emperor’s peculiar genius was again demonstrated — he had succeeded in having his enemies unknowingly choose exactly the course of action he desired them to choose.

COMPNOR is no longer an innocuous social club. It has become a powerful tool for the New Order. COMPNOR actively attempts to build the ethic of the New Order into the life of the average galactic citizen. COMPNOR is also recruiting young beings in huge numbers in order to assure that future citizens will consider the Old Republic a relic of the past, committing their lives totally to the New Order.

COMPNORs Role in the Empire

COMPNOR is more than a vocal and enthusiastic group committed to raisingyoung Imperial citizens to be totally loyal to the Empire. COMPNOR has made great pains to recruit from or insert members into the massive Imperial bureaucracy. In time, COMPNOR’s influence became so pervasive that the Imperial bureaucracy was under its complete control, and thus absolutely dedicated to the whims of the Emperor. During that era, the bureaucracy an-swered to the Imperial Senate (in theory). COMPNOR also took great pains to insert its members into local bureaucracies, on the sector, system, planetary, and even city level.

After Palpatine dissolved the Senate (“for the duration of the emergency”), COMPNOR’s Select Committee was more than adequately prepared to fill the void, directing virtually every policy decision made by the bureaucracy. The regional Moffs and governors had control over their systems, but also know that they will be observed by countless COMPNOR loyalists below them. With COMPNOR at his command, there is no way to resist the will of the Emperor …

No one knows exactly how many members there are now. Those in the lower echelons of COMPNOR believe there are still 15,000 or more members. Those who are higher up quietly guess that there are perhaps one hundredth that number. The Select Committee declines to dispel the confusion.

SAGroup is a contraction for Sub-Adult Group. SAGroup is the largest branch of COMPNOR. SAGroup has recently exceeded two trillion members, and it is still growing. SAGroup headquarters most resembles theoriginal COMPNOR, an enthusiastic group who firmly believes the New Order is the best regime for the galaxy.

Other branches of COMPNOR often recruit from SAGroup, but most other communication with the other branches is carefully screened by the Internal Affairs division of the Imperial Security Bureau (ISB). SAGroup is intentionally kept ignorant of most of the darker aspects of the Empire.

The Coalition for Progress

The Coalition for Progress is the central authority and clearinghouse for the reports of all of the Sector Monitors. COMPNOR members inside and outside of the coalition simply refer to it as “Progress.” Progress has grown from an understaffed and underwhelming authority on culture in the Empire to a large bureaucracy with surprising efficiency at gathering and analyzing the information which pours in from the Sector Monitors.

Recent events, however, have tied Progress much closer to the Imperial Security Bureau. They now gather low-level intelligence for the ISB, sifting through literally millions of reports on the chance of uncovering an as yet undiscovered activity of the Rebellion. Any pattern of activity which strikes Progress as suspicious is analyzed, and the findings are passed on to the ISB.

The Coalition for Improvements

Originally the Improvement Division of the Commerce agencies, Improvements became its own group when the Select Committee began reorganizing COMPNOR along the designs “suggested” by the Emperor. Improvements receives copies of Progress reports as forwarded by the ISB. Progress reports cases of system deviance from the ideals of the New Order to the ISB. The Imperial Security Bureau assigns Improvements those cases which will require long term solutions, especially when those solutions are best not associated with the Empire.

CompForce is the military arm of COMPNOR. They were created to give the Emperor large forces other than stormtroopers on whose loyalty he could absolutely rely. They are carefully selected volunteers from SAGroup. Assault volunteers are given rigorous training, and then put nominally under the command of a Sector Group. Observation personnel are selected from a different pool of beings than Assault personnel.

Regular Army and Navy personnel have no love for CompForce. Regular troopers and deckmen feel that CompForcers are given priority when it comes to new equipment or the allocation of valuable resources, such as medical attention. In sectors where COMPNOR has a particularly strong influence, this is true. Most of the dislike stems from CompForcers’ rabid adherence to the principles of the New Order. While the average deckman or trooper believes in the basics of the New Order, they believe they have better things to do with their spare time than self-examine their lives in excruciating detail to see how they might better serve the New Order. CompForcers are treated cooly throughout the military.

The ISB was created to increase the Emperor’s knowledge of political events, and as an intentional rival to Imperial Intelligence. While the ISB does not have the quality of intelligence operatives that Imperial Intelligence does, it is now the larger organization and is staffed solely by those loyal to the New Order. The competition has also served to put a little fire under both organizations as they try to insure that their intelligence is as good or better than the rival’s. The ISB Central Office is a mammoth complex in Imperial City which handles all of the communications and coordination tasks for the whole of the ISB.

The ISB serves more of a police function than does the Ubiqtorate in Intelligence. The ISB has a more public presence. Its operatives, especially in Surveillance, will often identify themselves as members of ISB, the intimidation value being worth the loss of secrecy.

The Commission of Operations transmits assignments through the Central Office directly to the Sector Officer for the branch in question: Surveillance, Investigations, Internal Affairs, Interrogation, Re-Education, or Enforcement. Any coordinated actions between the different branches within a sector, or between ISB resources in separate sectors, is dictated by the Commission and directed by the Central Office. Independent coordination by sector resources is strongly discouraged.

Surveillance is the largest branch of the ISB, containing nearly 35 percent of all personnel. The quality of recruit varies greatly within Surveillance. The spectrum includes promising, eager, but poorly trained candidates straight from SAGroup, CompForce Observers with better training, veteran officials from Progress’s Sector Monitors or Improvement’s Sector Development, to local contacts with an interest in subverting other local powers.

Surveillance’s main purpose is to uncover beings or activities which might be helpful to the Rebellion or otherwise obstruct the Empire’s plans. If Surveillance has enough suspicions, they will turn the case over to Investigations so more thorough action can be taken. The second purpose of Surveillance is putting the fear of the Empire into citizens who can be scared out of helping the Rebellion. This is the use to which the rawer recruits and less skillful veterans are employed.

Investigations draws its talent from proven agents in Surveillance, also drawing a substantial number from the Modification operatives who are looking to put their expertise to use in a new direction. Their professionalism and expertise is considerably higher than that of Surveillance.

Investigations agents have direct communication links to military forces in the area. These links are pre-approved by the Select Committee and the appropriate Moff or Grand Moff. Investigations individuals or teams may therefore call on a considerable degree of firepower if things become rough. This action was taken as a way of cutting down response times to legitimate Rebel threats which are too large to be handled even by a team of competent agents.

It is worth noting that this tactic works on both heavily developed and largely rural worlds, albeit for different reasons. On urban planets, ISB agents can operate unnoticed, and then call in the military to “swarm” the unfortunate Rebel base. On rural planets, the ISB agent cannot expect to devise a convincing cover identity, but ISB’s reputation alone is normally enough to gain the agent the cooperation of fearful locals. In either scenario, Rebel operatives are flushed out and eliminated.

Investigations has developed a grudging respect for the Rebel Alliance and its agents. A body of lore surrounding the story of the hunter and hunted, and how quickly the distinction can turn, has grown quickly. A few, such as Mar Barezz’s continuing struggle against the Rebel spy Tiree, and Huorne and Parl’s series of gambits against the Rebel Mon Cal Ackbar, have become legend.

COMPNOR rules and procedures have always been pretty sloppy on the point of internal policing of their members. Internal Affairs takes advantage of every ambiguity and gray area to expand their power.

The agents of Internal Affairs are isolated from the rest of COMPNOR. They have developed their own jargon, their own interpretation of the New Order, and have recently reorganized the agency to give lone agents greater authority to act on their own initiative. Other branches of COMPNOR have complained about the unusual autonomy of Internal Affairs. Crueya Vandron or the Emperor, perhaps both, must support this mode of operation, for nothing has been done to stop it.

When Internal Affairs convicts a COMPNOR member of a crime, the member is sent to Re-Education. Many of these people actually do return to COMPNOR, although they are always sent to a post of lower importance. Co-workers report that it is eerie working with the returnees. The returnees react strangely to the other workers, their conversation seems disjointed, their emotions out of phase with the situation. Officially, returnees are called “Graduates of Re- Education” or “Re-educated.” Most COMPNOR members say the graduates have been “Rebrained.”

Enforcement provides specialized muscle for the ISB, occasionally for Internal Affairs, but most often they lend their expertise to Investigations. Enforcement is the only division within all of COMPNOR which hires beings who are not COMPNOR members. Not only does this increase the amount of available talent, but Enforcement often has to take actions which the Select Committee would rather not be done by COMPNOR members.