The war against the Voiceless One is raging, and the New Order is having a hard time gaining terrain. Deputy Director Batzer sent the Overwatch to retrieve an old relic, a key, from a Voiceless One sacred place of worship. 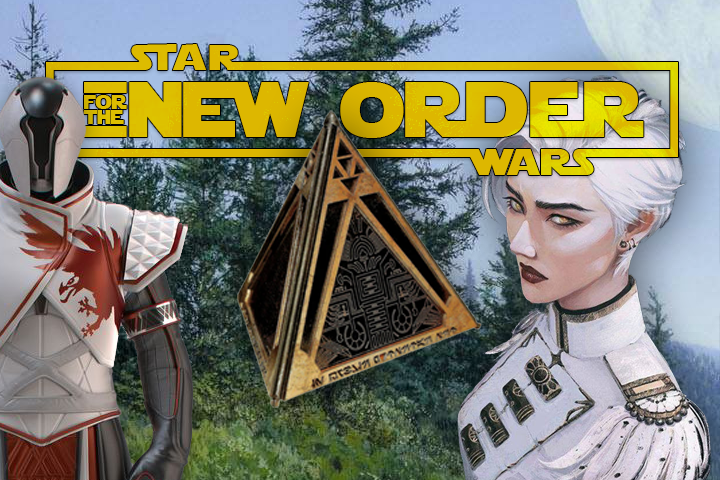 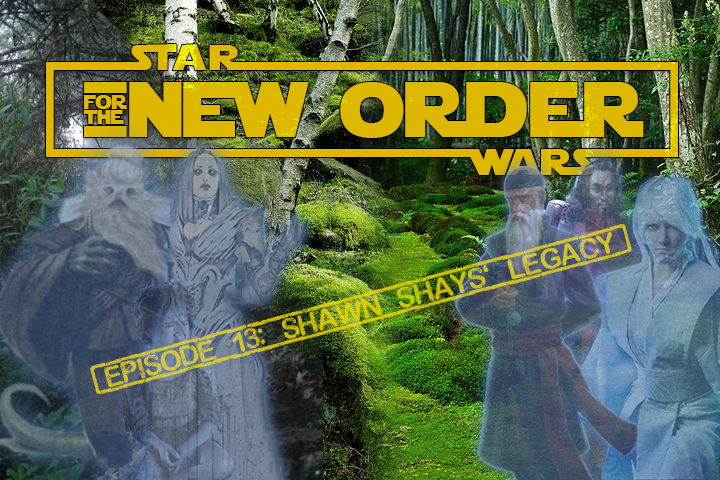 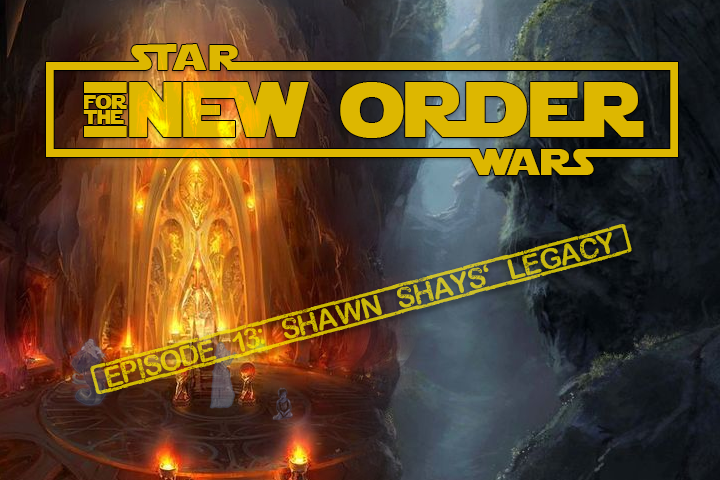 The PCs were smuggled to the forest moon of Sylvaria by Duquai and Cathryn, on board of the Marshlander.

Heading toward the temple to retrieve the artifact, the PCs were attacked by invisible beasts. After taking a few small hits, they sliced and burned the creatures. After that, the real journey toward the temple has begun, moving away from civilization, deeper into the forest. They crossed a waterfall, then encountered native temples guardians on natural bridges.

They then traveled in a very humid part of the forest where trees and rocks were covered by moss, making it hard and tedious to move forward. While crossing a bog, Jenssar fell in a quicksand-like moss pit, but pulled himself out, “helped” by Daasir. After that moss-intensive experience, they climbed stairs for hours; Kaine seemed a bit confused during this part of the journey.

At the top of all those stairs, they arrived at an old arch, covered in ancient symbols. Undrake scanned the arch for technical information while Daasir was trying to figure out the meaning of that alphabet that he saw while working with the Inquisitorium.

About a hundred meters after the arch, the Overwatch had to scale a cliff. Even with the rock being soft and crumbling, Kaine and Daasir had no problem climbing up. Daasir threw a rope down to help out. Undrake fell twice; he was most-likely getting too excited at first, skipping some security measures. Jenssar, preferring cockpits over cliff-climbing, waited for the rope, and carefully scaled up without any incident. Some of our travelers were beginning to feel the pain of a long hike and were most likely hoping to have a good old air-speeder in their pockets.

The final trail began by forking in two distinct paths. At the fork, they saw 3 markers. A stone marker had a new symbol carved in it and was positioned in the center of the fork. The two other stone markers were placed outside of each trail. Those two were similar to the ones they were following since the beginning of the hike.

The PCs went left. The forest became brighter and cleaner with less and less dead branches between the trees. They then saw, at a distance, about four or five caretakers that were gardening and cleaning the forest. They seemed from the same race as the guardians they killed earlier. Right as they were planning an attack strategy, a very polite force-ghost named Raimunus appeared and started to convince them to move back and take the right path instead. Saliris, another ghost, then joined the conversation in time to see the characters turn back. Based on Daasir and Undrake memory, the force-ghost are former members of the Order of the Balance, that were important somehow.

In the right trail, the dense forest slowly faded into a rocky swamp. There were bridges here and there that were built to cross ponds. This part of the forest was not cared about by anyone and was very dirty. After a while, the forest became more like a foggy wasteland with limited visibility. While advancing, there was nothing: fewer and fewer sounds, fewer and fewer animals, fewer and fewer lives.

Now facing a huge dark-force-user statue in the middle of the wasteland, Daasir and Undrake started to analyze the material and the carving. They then met Zacharious, Néméguène, and Amalicius, three new force-ghosts. Zacharious was a little boy, about 12 years old, dressed in a Jedi-like robe. Néméguène was a Thisspiasian, which are serpentine species with four arms, also wearing a Jedi-like robe. Amalicius was walking toward them from afar, in a slow, but confident gait. She was a strong woman, with dark brown hairs, wearing a fancy Jedi-like robe. She had strong facial traits and look severe. Maybe even a little deviant, but they did not noticed that. After a bit of talk, they agreed to help the characters acquire the dark temple artifact to vinquish the Voiceless One. They then jumped into Jenssar’s family heirloom and lucky charm: a ring, given to his late father by Palpatine himself!

Tired of that hike, they arrived at the top to see both light and dark temples, separated by what seems to be a cliff. A bit further away was a landing platform, but they can’t see if there is a ship or not that is landed there.

The dark temple is gigantesque, built with dark grey stone, and carved into the mountain. A large bridge over a chasm leads to the temple. The gorge also separates the two temples, in a naturally chaotic pattern.

They tactically crossed the bridge to find the great hall. The hall is made of old grey stones and features a high vaulted ceiling. The place appears to have been pillaged and looted. At the other end was what seemed to have been an altar and a colossal statue. There are a few corridors, but only two main one appears to exit the hall.

Moving forward in the temple’s non-symmetric dark tunnels and twisted architecture, the PCs explored quite a bit. They found much information about the place, the Order of the Balance, and a Fallen Master that could haunt the place.

After getting deeper and deeper into the temple, the Overwatch unwisely reached the Fallen Master’s burial place, where he sacrificed himself and his two apprentices. The three former force-users touched the realm of the living with their ghostly lightsaber, which led to an intense fight. The combat was almost lost at some point, but the PCs luck turned after Eliades and Fae-Dayo argued together to know who had the right to kill whom. Jenssar channeled his heirloom power and used the ghost stored inside it to temporarily bind the spirits to their respective altars and allow the Overwatch to move on. Bringing with them their unconscious ally.

They continued to move deeper into the cavern. The caves were full of enormous statues, some there watching them pass, some holding the ceiling. The twisted architecture continued, even that deep into the ground.

The PCs finally reached what seemed to be an arena, a colosseum. Two thrones and quarters were located on the top level for the light and dark temple’s headmasters to watch the two schools’ clash. Once they activated both sides, they created different scenarios that both had to agree to, including pumping lava into what seemed to be a deadly obstacle course. On the lower level of the arena, they found two medical facilities that they used to restore their health.

After about a week of bacta treatments, they were all back on their feet. During that time, the healthy ones did some digging. They found valuable information about how the invisible beasts are used in the Voiceless One stealth technology. They also learned that after the artifact chamber is what seems to translate to the Ultimate Power Machine.

Using a map of the area they found, the Overwatch continued their journey deep underground to reach the lava pit. Unfortunately for them, their little fun in the arena broke a few ancient magnetic fields generator and canalization. That allowed the lava to do even more damage, destroying the passageways to the other side. The PCs crossed the lava pit room using Undrake’s engineering skills and some old equipment that they found there.

Then they reached the forgotten city that was long abandoned and deeper underground than anyone thinks it would ever go. They noticed a presence there, but they did not investigate further, passing through it to reach what seemed to be a temple, carved into the cavern stone. In there, led by Kaine’s uncanny sense, they got to the artifact room, where Shawn Shays and a few Voiceless Ones were waiting. Shawn has a distinctive ring that belonged to Cathryn wrapped around his neck. The PCs noticed the head of both the Marshlander operators, Duquai and Cathryn, on pikes next to him.

During an endless fight, the PCs triumphed over Shawn Shays and his Voiceless One’s minions. At some point, near the end, a Show Trooper tried to escape with the artifact, leaving Shawn bleed to death behind, but the Overwatch prevailed!

Jenssar, helped by the three force ghosts that live in his family heirloom, found a secret passage leading to the Ultimate Power Machine! As described, based on its design, the machine was made by deviant force users. Jenssar, encouraged by the three ghosts, recklessly entered the device and activated it.

While in it, he tapped into the Voiceless One’s power source, mapping the entire wild space area and beyond occupied by that enemy of the empire. The more he dug into it, the more the flow passed through him, as the conduit that he was born to be.

He started to blow up Voiceless fleets, then moons, planets, and entire systems, using the Ultimate Power Source’s energy against them! While doing that, the Emperor himself reached him and asked Jenssar to use the machine to transfer his living force to Exegol. Palpatine was falling toward the Death Star reactor. Without hesitation, Jenssar did what was asked of him to save the Emperor! Unfortunately, destroying the Voiceless One and saving the Emperor was too much, and the machine started to overload.

Meanwhile, the other PCs started to feel the energy pulses being more and more powerful. At some point, when they realized it, it was too late; the machine is overloading, and they had to leave Jenssar behind. They then fleed toward the Voiceless One landing pad, stole a ship, and left. Once in space, the seismic activity was so crazy that they knew the moon was about to explode, so they planned a hyperspace course. Just before jumping, they saw the moon explode, with Jenssar on it…

Once back at Deputy Director Batzer’s fleet, they got debriefed and learned that the Voiceless Ones’ damages to their society caused an extinction/genocide-level event! But they also learned about the destruction of the second Death Star and the death of the Emperor.

The End of the thirteen-logy

The alpha male of a pack of feral invisible beasts…

Order of the Balance Temple Stone Guardian Voiceless One,  (RIVAL)

Satues of ancient guardians, protecting the artifact room of the Order of the Balance deep underground Temple, located in the forgotten city.

A Voiceless One body guard soldier dressed with a military uniform, a Ceremonial Combat Armor, and holding a Ceremonial Blaster rifle in his hand. These fighter are specially trained to protect other high profile officers.

Hard to see, the Shadow Troopers are blending with their environment, like cameleons, using Voiceless Ones’ tech.

A common soldier dressed with a military uniform, a padded armor, holding a Blaster rifle in his hand.