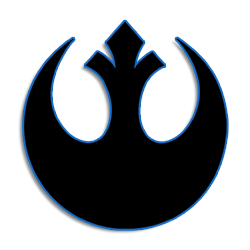 Officially, the Overwatch had to convince the CEO and the Board of Directors of Silver Sun Mining Company to allow the empire to secure their facilities due to an increase in rebel activity. Unofficially, the Empire suspected the Silver Sun Mining Company of letting the rebels steal starfighter-grade durasteel to help the rebellion against the New Order.

The PCs had to convince Tom Krenik, the CEO, and his board of director, composed of Phoebe Gray, Peggy Komarov, and Douglas Fujiwara, but they were very busy and unreachable.

Guided by their liaison agent, Inspector Salvatore Rautenbach of the ISB, the PCs walked around the space station trying to get an audience, but without success.

Undrake digged some dirt, from Peggy Komarov got arrested for stealing a candy from a baby to the fact that Tom Krenic’s uncle is his real father. During that time, Dargon learnt that Silver Sun Mining Company needed of some high-tech equipment to do prospecting on the radioactive moon of Vorta-on-aachor. Starlight Industries was able to break the tie between the two other companies, bidding on that project, leaving the high-executive less busy.

At some point, the PCs realise that 4L-FR3D is missing. They find it deactivated on a table with a young technician connected into it digging for information. As they cross the door an holo-recording starts, it is Casandre talking to 4L-FR3D. That message should not get out of there! The technician finally told the PCs that he was hired by Phoebe Gray.

During all of that coercive diplomacy, a few rebel transports docked the station using stolen clearance code; then the rebels of Fitz Gorr attack, helped by captain Xreq’is of the Dreadnought-class Heavy Cruiser Poseidon, and assisted once again by the B-Wings Phantom Squadron and a few more X-Wings.

After multiple firefights between the rebels, the station guards, and the Overwatch, the Imperial Star Destroyers Crucible and the Judgment jumped out of hyperspace, making the rebels flee like cockroaches, and saving the day! The clean up mission was lead by Darth Vader himself, seeding fear into enemies crossing path with him! Jenssar was energized by the presence of the Crucible, his old operational base.

In the end, all point out toward Vader orchestrating that little operation; but no matter, at this point, the board had no choice but to agree with the Empire, the station is already swarming with Stormtroopers…