The Vigil-class corvette is the smallest vessel in the iconic Star Destroyer class of ships. Lightly armed and armored, it shares the dagger-shaped hull and large crew of its larger siblings, and operates as both a picket and reconnaissance vessel as well as an escort ship for larger, cruiser-sized ships

Thanks to their size and role, these vessels rarely serve in the line of battle with larger types of Star Destroyers. Instead, they patrol trade routes, serve as battlegroup leaders for small, backwater fleets, and operate as lone cruisers among the fringes of the Inner and Outer Rim, battling pirates and smugglers and rooting out Alliance agents.

The Kaki Usyk is mainly controlled by the PCs, and has been modified to allow the docking of their transport ship. 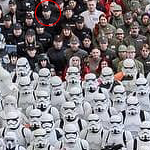 Captain of the Vigial-class corvette Kaki Usyk, under the command of the PCs.

Dargon StarLight has been dispatched to lead some special forces for a secret mission and left Raymond to infiltrate the EdG criminal syndicate. L33T is being used on the frontline of the war raging in the system Sevaren. Meanwhile, Commander Foxwell calls Undrake and Jensar to the bridge of his ISD, then travelling to the Kuat Drive Yard.

Commander Foxwell then show a new Vigil-class Corvette to the PCs; the ship is named the Kaki Usyk. During the inspection, the PCs meet Aristokra Akara and Lieutenant Vraak Nirr leader of the Phantom Reapers; sole survivers of the battle of Tretk III.

The Chiss Initiatives deciphered the file found by Undrake. The document contains ancient Jedi symbols. A piece of a Jedi-Sith War era-old translator device could be located under an old supply depot base of a remote jungle planet. Raymond, infiltrated in the EdG criminal syndicate, discovered that the station was a base serving the infamous Brew Wilfinger aka “Brewinger”.

The PCs paid 1800 credits to get information on the whereabout of a rebel agent that could lead them to a secret base.

The PCs gave 2 military-grade blaster rifle crates to Brewinger to gain access to some information about the rebels (that ended up with nothing, see below, and it became running gag inside Brewinger’s organization).

Kaine found a drunk that allowed him access to the basement, giving the PCs a chance to search for the artifact, but after taking a wrong turn, their turbolift opened right in the command center, where Jenssar recklessly attacked Brewinger and his man.

That ended up with the Kaki Usyk attacking the base and getting highly damaged; Foxwell was furious!

The Kaki Usyk was part of the Mulino system’s invading forces.